A tribute donation is a thoughtful way to honor a special person or pet while supporting our mission. When you honor a loved one with a memorial or honorary gift, your special message will be available on our site as a lasting tribute. 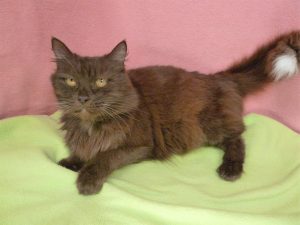 Diane has worked alongside and within PZF since the 90’s, in the community doing TNR, spay/neuter advocacy, and for many years a part of our volunteer adoption team. When her professional responsibilities increased, and Diane no longer had the time to volunteer she continued to serve as a member of the Board of Directors.

Beautiful and gentle Godiva was one of several cats that needed emergency rescue due to an unfortunate situation where they were. She was older, and PZF felt she needed a chance. Once in our care, and examined by a doctor, she was found to have fairly advanced breast cancer. Diane stepped in and cared for Godiva in her home, a place of security, love, and attention, during her “hospice” months. One day, when the bad times outnumbered the good ones in Godiva’s daily life and she was becoming withdrawn, Diane brought Godiva back for the one last thing she and PZF could do to help her. Her spirit is now free of her damaged body.

PZF is so fortunate to have Diane as a presence in our organization. Godiva taught us all how to manage hardship with grace and love still to share.

In Loving Memory of Rima Cohn 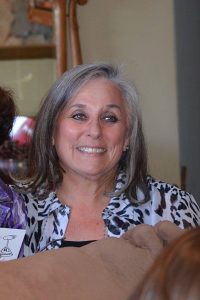 When Rima first came into our family, I was about 8 years old, and one of my earliest memories was visiting her home with my parents, and getting to know her two cats:  Hugs and Kisses.  Over the years as our family grew, Rima’s family of pets did too. Over the years as Rima started driving less due to health issues, I would always pick her up to bring her to our family holiday celebrations, which she absolutely loved. She would always bring along her 4 dogs so they could run in the yard during our family event.  I think her dogs loved the family gatherings as much as Rima did.  In the evening, when it was time for her to go back home and tend to the several cats that were awaiting her return back at her house, I’d round up the dogs and bring her and her dogs back home again in the evening.  That cycle eventually became a family holiday ritual.  Her love for her menagerie of animals was foremost in her life, and she was as loyal to them as she was to our family and her friends. She included her pets in her will, ensuring that financial resources would be available for their care for as long as those animals lived.  And I also know that all of Rima’s dogs and cats (9 in total, as I recall) are well cared for to this day, due to loyal friends who are making sure that this happens.

During the recent holiday season, Rima’s seat was noticeably absent at our family gathering, and there were many conversations about her among all the family members who were at our outdoor, socially distanced gathering.  My mom especially was remarking in the morning how much she still misses talking with her. 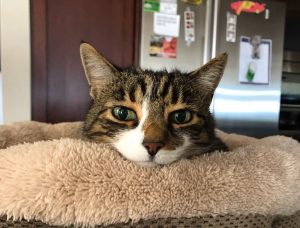 Conrad, the handsomest boy, passed suddenly on Saturday, a week before his sixteenth birthday, due to heart failure. I found Conrad in a box on the sidewalk in lower Manhattan during a snowstorm, along with his two siblings (who found good homes). From a one-bedroom in the city, to a condo in the burbs, to the beachside balconies of Venice Beach, Conrad always loved his family, his friends, his home, and daddy. If the most expressive eyes this side of DiCaprio didn’t tell you what he was thinking, his voice always could. Conrad, forced into roommate situations (feline, canine, and human) beyond his control, always found a way to not only adapt, but also to maintain his position as the king of the castle. His sleeping spots were always the warmest; his vantage points always the most choice. When I decided to keep him, I did the math: “would he see me get married? have a home? become a success? Would he be there for all that?” He would. He could always be trusted to go outside – he knew where dinner was; he knew where daddy would be waiting for him. He lived with me because he wanted to, not because I locked him up. He wore a collar, just in case, but no one ever had to call. Though he lived sixteen years, his sudden death spared me the choice, with the knowledge of his heart condition, to eventually have to make his last choice for him, for which I, eventually, will be incredibly grateful. And he had the last laugh not outliving his dashing good looks. But for now, having woken up with my best friend and about to, for the first time in a long time, go to bed without him, I’m just very, very sad. I love you handsome man, and will never ever forget you. Hug your pets, every day.

In Memory of Lily Stashin 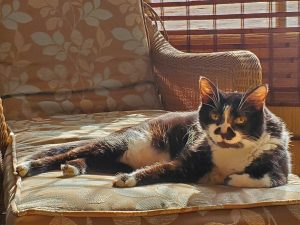 “Meet & Greet” appointments are available 7 days a week. After submitting an online application, an adoption counselor will call you to discuss your adoption preferences and confirm an appointment. Submit an online adoption application form here.

Signup for our NEW Digital Newsletter

Dedicated to helping animals since 1977, the Peter Zippi Memorial Fund is focused on both animal rescue and spay/neuter assistance. We rescue abandoned cats & kittens as well as those that have special needs at shelters. We provide them the care they need to be ready for adoption and then find them a new loving home. We also provide assistance for spaying or neutering of domestic and community (i.e. feral) cats, dogs and other animals. Peter Zippi is a no-kill animal rescue organization.

We need cats to need us. It unnerves us that they do not. However, if they do not need us, they nonetheless seem to love us.